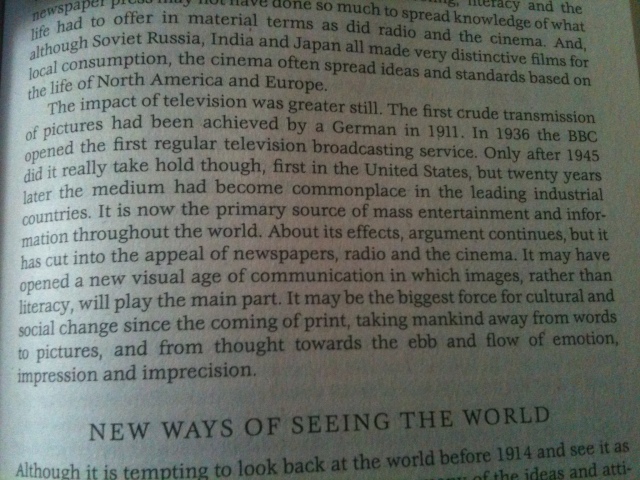 From A Short History of the World by J.M. Roberts, published 1993 by Oxford University Press.

The above words were published in 1993, only a couple years before the Internet began to catch on (I remember starting to use e-mail around 1995). I find them fascinating. If you start reading at “It is now the primary source of mass entertainment and information throughout the world . . .” and continue through the end of the paragraph, you could just as easily now say all of this about the Internet. But this author was writing about television.

Marking 1936 as the dawn of television as we know it, I wonder if this prophesied “biggest force for cultural and social change since the coming of print” will even last 100 years.  And then I wonder about the world-wide-web in comparison. Is this another “big new thing” that turns out to have a human-sized life-span? Or is it truly as much of a game-changer as the printing press (or more)?

Television’s days now look to be numbered, and even the printing press doesn’t run like it used to. The Internet incorporates both images and words. Images do seem to play a larger role in our general discourse than they did before the days of television, and I see no sign of that changing through our Internet use. But words continue to coexist with images, and if anything, it might be argued that the apparent triumph of Internet over television is evidence that words continue to be valued along with pictures. We want to be able to talk about what we are seeing.

The connectivity and interactive nature of the Internet certainly make it a more powerful and pervasive force than television ever was. And in actuality, rather than competing or usurping, the Internet seems to be simply swallowing and reconstituting television – along with radio, newspapers, the telephone, the personal letter, the community bulletin board, the music industry, maybe even the printing press.

What do you think?

Is the Internet here to stay?

Is our culture driven more by pictures or by words, and has the Internet changed anything about that?

Does the prevalence of the Internet over television signify a more thoughtful culture, or have we grown even less intelligent and more entrenched in our points of view than we were when we only had TV? (Now we have way more information available to us, but we can more easily find people and perspectives that reinforce our own static thinking. In the glory days of television, information and ideas were much more limited but, ironically, we were more likely to be exposed to people and ideas we might disagree with. True? Or not exactly?)

Has anything actually been swallowed whole by the Internet? Or will anything be? Or will we always have, operating apart from the world-wide-web, things like radio, newspaper, television, etc.?

And is that an image at the top of this post or is it words?